Born and raised in the barrios of Los Angeles, Beck staged a bit of a homecoming earlier this month, prowling Cesar Chavez Avenue in the Boyle Heights section of East L.A. with an acoustic guitar in hand, jamming out with an honest-to-goodness mariachi band and hitting up the local swap meet.

But he wasn’t visiting the area for nostalgia’s sake. He was there to film the video for “Girl,” the second single off his recent album, Guero (see “Beck Is Reflected In Baby Guero, Has More Music Ready”). Working with directorial team Motion Theory, Beck shambles his way along the dusty streets, stopping to scope out scenes which then fold up right before his eyes, à la the back-page “fold-ins” in Mad magazine made popular by artist Al Jaffee.

“The whole thing is an East L.A. tribute to Al Jaffee,” Beck laughed. “Boyle Heights, Cesar Chavez Avenue. The mysteriously named Motion Theory are directing. Who they are and what they are doing is shrouded in mystery. I don’t think they’ve actually figured out which one is ‘Motion’ and which one is ‘Theory.’ But they’ll sort it out as the video progresses.”

According to co-director Mathew Cullen (the other is Grady Hall), the fold-in concept works with the many levels of the song, a snappy, summery guitar tune that might very well be about killing a girl (sample lyric: “I know I’m gonna steal her eye … I know I’m gonna make her die”). 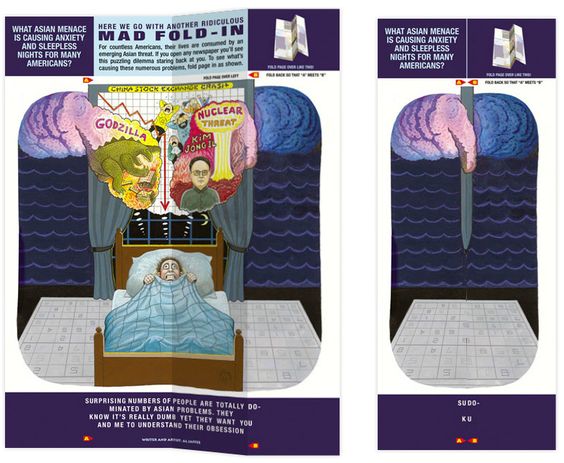 “The song has a great dichotomy to it, so we were really drawn to the idea of seeing one image and then you fold it in on itself and it creates something completely different,” Cullen said. “And at the core of that is Al Jaffee and Mad magazine. He’s the godfather of fold-ins, and we’re bringing those fold-ins to life, so we made sure we got his blessing on everything.”

In one scene, Beck walks past an ice-cream vendor and glances up to a painted mural that reads “Beauty and Grooming Supplies”; the mural is folded to become “Beauty Lies.” An advertisement screaming “Cupertino’s Gym: Call Joe or Mike” is folded into “Cup Cake,” and a little girl’s sidewalk chalk drawings become the chalk outline of a dead body.

These kinds of subversive messages run through the video — and the song itself. Even Beck, notoriously evasive about his lyrics, copped to “Girl” ‘s sinister side.

“It started out as a really kind of sweet song, kind of saccharine, and it was one of those things that needed some mud and some grit, some dust and some gristle,” he said. “Some of the images are dark [because] I love the Pixies. I love the Velvet Underground. I think there’s a long line of that kind of pop and darkness.”

Fans in the U.S. (well, those living on the West Coast, anyway) will finally get a taste of that “pop and darkness,” because after months of speculation, Beck has announced a handful of California tour dates: July 11 in Santa Cruz, July 19 in Santa Barbara, and two nights in L.A., July 22 and 23.

As for when the rest of us will be able to check out Beck’s live show, well, patience is the key (see “Beck Leaves The Lanterns Tattered At Semi-Secret New York Gig”). There are no dates announced, but a spokesperson for Beck’s management said a full U.S. tour is scheduled for September. But don’t take a faceless spokesperson’s word for it: Let’s hear some tour news straight from Beck himself.

“We have a new band, and we’ll be out all summer,” he said. “We will have robots, films, dancing and, um, high-impact stage maneuvers.”